PART ONE OF What We Should Have Seen, Where We Go From Here (1 of 8)

“Go out and stand on the mountain,” the Lord replied. “I want you to be there when I pass by.”

A voice asked, “Elijah, why are you here?”

In the days of Ahab and Jezebel, God scheduled an encounter with His prophet—an encounter that necessitated a disruption of expectations. With astonishing poetic economy, this brief story manages to produce what every good epiphany should: curiosity, surprise, and delight, even while forcing us (as it did Elijah) to change the way we think. In the best case, such “aha” moments dislodge our current paradigm in favor of a more accurate one, a liberating process which the late Joseph Campbell explained, “wipes out the ego.”

Using this as a literary doppelgänger for 2020, the last six months have surely been a massive ego wipe for the church. We unexpectedly came to an Elijah Moment, only to find that it was not the glorious confrontation of Mount Carmel, but the confusion of the cave. Fire did not fall, our churches closed. 2020 was supposed to launch the “Decade of the Voice,” yet what happened instead? The church has been mostly muzzled. Literally, with a face mask. Metaphorically, with nothing particularly interesting to say.

It was supposed to be a year of vision and clarity, yet we were all blindsided. If hindsight is truly 20/20, our foresight, clearly, was not.

Memes abound. Many are painfully funny, but the headlines aren’t. People are whistling in the dark, or screaming (and dying) on the streets. Or both. Meanwhile, where is Elijah? Where is the bold, clear prophetic witness of the church?

Sure, we’re here. Technically, we haven’t gone anywhere. We’ve even adapted. We’re quite proud of our new technological savvy, thank you very much (and thank you, Zoom). Yet by and large, it would be hard to make a case that the people of God have proven, per Solomon, to be “bold as lions,” or per Daniel, to “do exploits” and “give understanding to many.”

We haven’t exactly been flowing founts of wisdom. We haven’t laid our hands upon the rudder of culture with keen, anointed spiritual guidance to steer the lost through these troubled waters. Mind you, in all these indictments, I plead personally guilty. Instead, we’re scrambling just to find something meaningful to say; even then, we can’t agree on what that should be. In the cacophony of liberal and conservative politics, conspiracy theories, armchair pundits and social media trolls, our voice barely registers above the din of fear and outrage. To rub salt in the wound, many of our boldest, clearest prophetic declarations have been flat out wrong. In their place, we’ve subscribed to a few rising stars on YouTube who are clearly gifted in forceful diatribe, but weak in meekness. They communicate the politics of earth more than the heart of our King, while average folks stumble around in mild shell-shock, trying to pinpoint exactly when they lost their country (or so it seems).

Torn between confusion, fear and a vague revolutionary sentiment, the net effect has become a ping-pong match between the church’s private passivity and public bluster, between the esprit de corp of a trusting, compassionate, cooperative citizenry and a growing suspicion that not-so-subtle authoritarian agendas have begun leavening society. In one pastor’s vision, two giants of fear and hate are charging each other, and their collisions are sending shrapnel and shockwaves across the country, yet do we need this visionary experience to confirm what’s happening? The whole mess is playing out in a wild clatter of keys, Shares, Likes and angry face emoticons on social media, leaving the church blinking and dazed along with everyone else. We have grocery bags full of excess toilet paper (strangely fitting, don’t you think?), but we don’t converse with empathy, engage with truth, or proclaim with authority. Like everyone else, we either whisper gossipy factoids or spew frustrations.

This is definitely not how things were supposed to go. Heading into 2020, we were confident in the radical advance—nay, the divine intrusion—of the next Jesus Movement. The streets were going to be filled with evangelism. In the Win column, according to some reports, roughly twenty mass gatherings and/or stadium events were planned for 2020 in America alone. What happened? One single stadium, that’s what. Phoenix, Arizona. Kanye showed up, and all the people said amen.

Then COVID-19 showed up, and all the people went home. Everything shut down, except for the riots. Instead of mass evangelism, we got mass demonstrations, and a dark new prophetic narrative called “cancel culture.” At first, the staccato pace of these bizarre events registered like a dopamine hit for both conservative Biblical eschatologists and liberal social justice warriors, i.e. are we finally going to see the long overdue, tectonic, culture shifts that will mark the end of the age?

But where is the church?

Where is the piercing light of the Word to light our way through this troubled night?

Actually, that hollow sound in the middle of our professional spiritual infrastructure is our best, most accurate diagnostic to date, and should be ignored only to our peril. Yes, it is troubling. That’s the point. Let it trouble us! Let that hollow echo bother and provoke. Let the gap between what we should know and don’t, should be and aren’t, irritate and vex us one and all, pastors, pews and prophets alike. Let us admit that 2020 did not empty us, like pulling a stopper from the bottom of a bucket. These head-spinning events have revealed that we were mostly empty already.

“Go out and stand on the mountain,” the Lord replied. “I want you to be there when I pass by.”

We need this cold, silent moment with the Lord. We need it, because we need our eyes washed, our ears retuned. The Lord is in the process of positioning us to encounter Him, but first He must expose and strip away our wrong expectations, outdated assumptions, and religious paradigms. Consider Elijah, who already hears the Lord rightly, yet is now being drawn far away, out of the way, to an ancient covenant location (Horeb = Sinai) for the purpose of a fresh encounter with the Lord in the form of a lesson in discernment and new marching orders. Why? Because God’s future agenda requires a recalibration of the prophetic faculty. It is the tendency of nearly all prophetic trendlines to eventually trade the unction of the spirit for subtle narratives of the soul. While the wisdom of man will always eventually fail, the problem lies in that deceptive period of time in which it appears to succeed. It is therefore the kindness of the Lord to expose our faulty foundations and self-indulgent “prophetic” utterances.

This is where we are. In the short term, it is quite discouraging. Embarrassing, actually. We thought zig, but God zagged. We thought something good was coming, that the 2020s represented a surge forward in ways that would be transparently obvious. Instead we are now required to look deeper to find anything positive. It feels more like the canary in the coal mine warning of the imminent collapse of civilization than it does revival. Don’t worry, there’s a lot of decade left—a lot of God left! But we have lessons to learn. Our “surging success” revival narrative has proven grossly inaccurate in these early stages, not because it won’t eventually happen, but because we did not anticipate or prepare people for how. The way we framed the surge was simply too small, too conventional, too mundane. We missed key ingredients. Our thinking was too linear, too rooted in our creature comforts. The spirit is going to move, we said! Revival will be fun and happen in a way that doesn’t disrupt my schedule! We didn’t say that, of course. It was simply a subconscious assumption. We thought we could still control our life and see God move. Our view of revival was very personal—micro, not macro.

It now seems God is more serious than we anticipated. The revival He wants to bring is likely to be broader and more holistic, more eschatological, than what we were contemplating. It won’t be just about salvation, but dismantling paradigms, faulty thought systems, and the social, political, and financial infrastructures they support. It won’t be about your church service; it will be about the formation and expression of Christ in your midst. It won’t be about programs, but prayer and proclamation, anywhere, everywhere.

As large as we thought we were thinking, it wasn’t large enough, because it did not include suffering, nor did it consider the stratagems of the antichrist spirit rising in tandem to oppose. Wheat and tares are sown together, but we proclaimed only the wheat, not the whole counsel of God. We prophesied a sprinkling of good things without a baptism of testing and affliction. In 2019, we did not pause long enough in our meditations and revival eagerness to fully appreciate the scale of upheaval and cleansing that God desires to bring to the earth, nor did we properly assess our present, prayerless authority in the face of nominal spiritual resistance.

The net effect released deeply felt soulish words from good, sincere, anointed people, but not from the second heavens, much less the third (the council realm of the Godhead); rather, our declarations and quasi-prophecies emerged mostly from an optimistic, faith-laden, emotion-driven sentiment, which we then labeled, “the Word of the Lord.” Then we waited for the fireworks of glory we had led others to expect. As with Elijah, we had the assurance of what to expect based on the familiar motifs of previous moves of God. Yes, Lord. Bring it! Fire, wind, shaking.

Instead, the intensity of those phenomena were not the Lord. For both Elijah and us, they served to push us further and further back into the cave. Listen, we need an upgrade, and the upgrade is the Lord Himself, not what we project upon Him or expect from Him. For Elijah to hear the necessary future rightly, the Lord wisely knew a new baseline had to be established. The noise and emotional traffic had to be removed. When Elijah finally connected to that silence, he emerged again. Yahweh drew him forth not to the flurry of revival, confrontations with kings, or the fear of government oppression, but with peace, mystery, and stillness.

“Finally, there was a gentle breeze (“whisper” NIV; “thin silence”) and when Elijah heard it, he covered his face with his coat. He went out and stood at the entrance to the cave.”

If we have been silenced, perhaps it is because the Lord graciously knows that only silence can renew and prepare us for what is to come. Yes, I am surprised and disappointed—in myself, first, but also troubled for the Body of Christ at large—for how deaf and impotent we seem to be at present. For the exact same reasons, I am greatly encouraged. Beloved, take heart: over the long term, the integrity and authority of our voice is being refined seven times for the glory of God. If we will respond rightly and allow the necessary humility of this correction, we will be far better positioned for truly troubling days to come. This is but a dress rehearsal. A skirmish. The final battles of the last days lie just ahead. I am confident that when we admit our weakness and error, we will hear a small, tender voice in the wind, and find a path to emerge from our cave. God has prepared this moment. It is about a new download, a fresh upgrade.

In coming weeks I will look at various perils, upgrades, and the potential hidden in these uncertain times. Stay tuned.

PrevPreviousIN A TIME OF PANDEMIC, ONLY ONE CAN SAVE: THE MOST IMPORTANT LITTLE BOY IN THE WORLD
NextHindsight 2020: Perilous Path. Ditches on Both Sides.Next 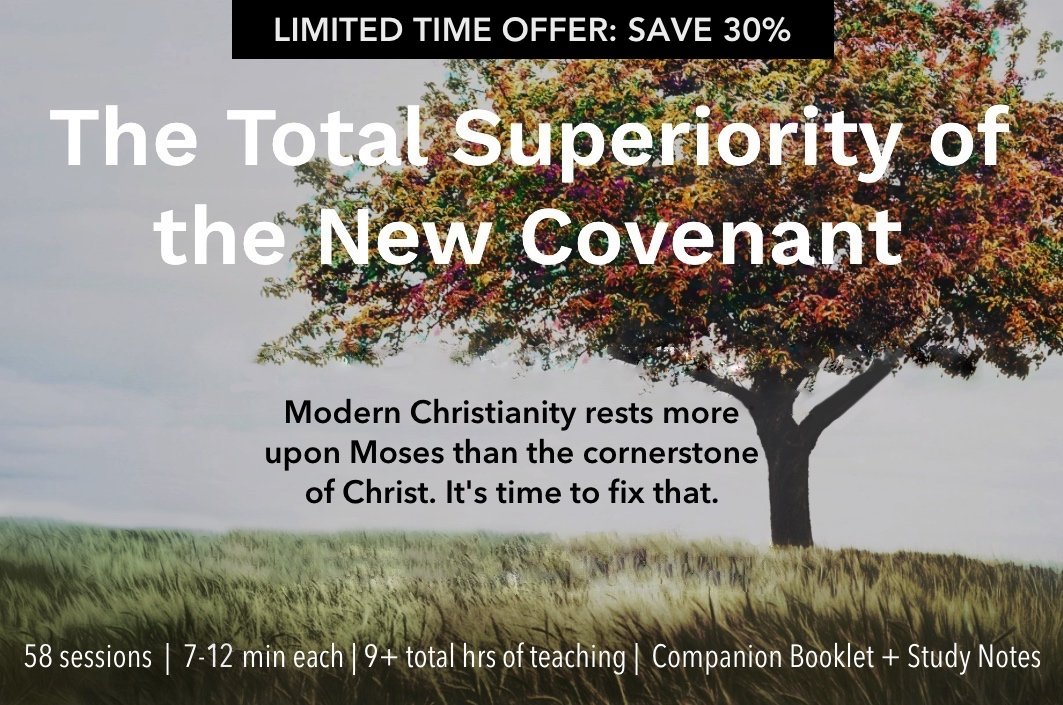 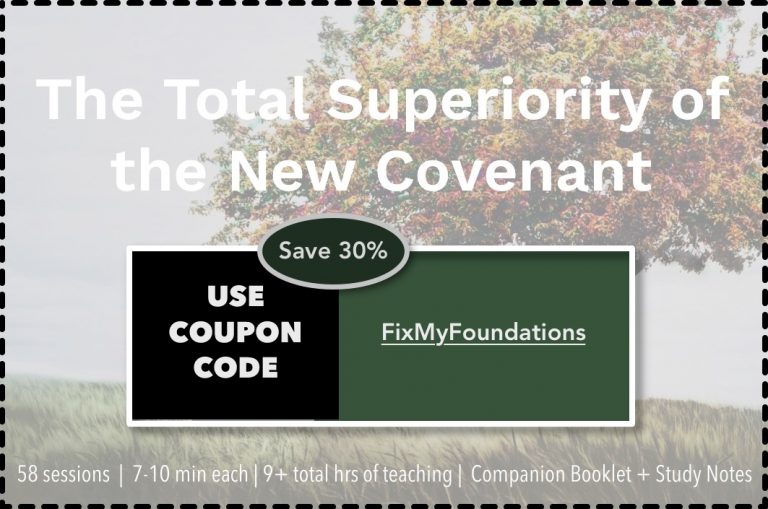 Thanks for subscribing! Feel free to use "FixMyFoundations" immediately, but we also emailed it for your convenience.