A Life of Dreams 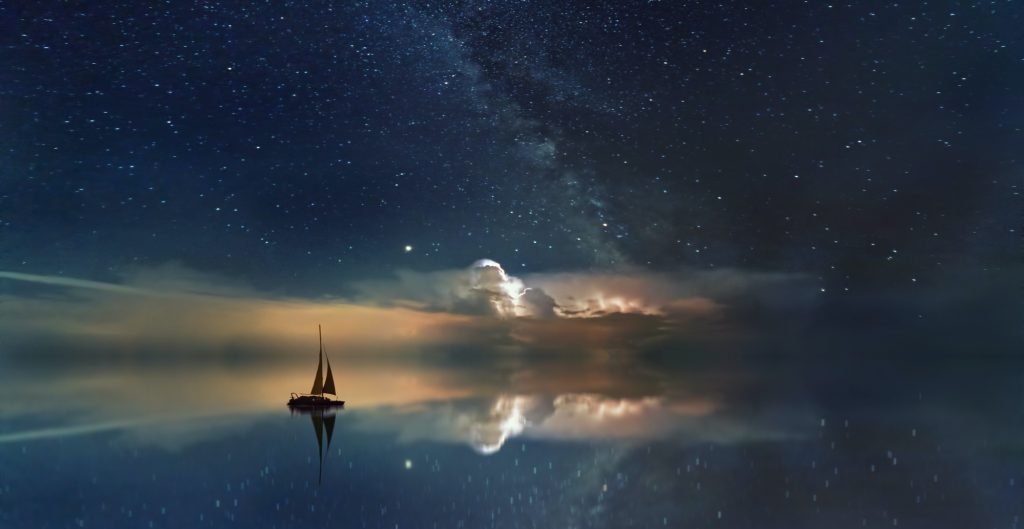 “For God speaks in one way, and in two, though man does not perceive it. In a dream, in a vision of the night, when deep sleep falls on men, while they slumber on their beds, then he opens the ears of men” (Job 33:14-15)

More than four decades later, I still remember, vividly, my first dream. I was five years old. It felt like a nightmare, but it was actually an important, life-shaping encounter with God.

In the dream, I was my young self, and I was being stalked by a group of other young people. These young people were a mix of adolescents and teenagers. In the dream, I only knew them as “Bombs.” They had a zombie quality, not so much undead as mind-controlled. Glassy-eyed and relentless. Their conscience had been subverted. They were unthinking in their mission, and their mission was to touch other children like me. When that happened, whoever they touched also turned into a Bomb and then joined their mission. I spent the whole dream running, avoiding them, but their ranks continued to grow. It was exhausting. At the end of the dream I was pinned up against a wall facing a closed door with nowhere else to run. I grabbed the doorknob and cried out, “Jesus, Jesus! Lord, Lord! Save me!” The door opened, Jesus came through, and all of the Bombs fled. I was saved.

How my first dream shaped me

As you can imagine, I awoke, terrified, and ran to my Mom in the middle of the night in tears. She comforted me, coaxed the dream details out of me, and then, sensing that this was more than a nightmare, faithfully scribed the dream. The net effect of the whole experience had both immediate impact and extended consequence on my young soul. You might be wondering, can a scary dream be a good dream? I will list four ways this dream positively impacted my life:

From that day forward, I began to think of myself as a dreamer.

The dreams of my children

Growing up, all of my children had at least one meaningful dream. Sometimes, they were gloriously silly, like when my son, Hanson, received the solution to a certain, difficult level of a Nintendo game called Yoshi’s Island. He had struggled and struggled with the level for days, replaying it dozens and dozens of times, but could not figure out the puzzle. Finally, one night, he dreamed the solution. Running into the living room the next morning — he was perhaps seven years old at the time — he excitedly claimed a dream had shown him the answer, something he had not yet tried. Sure enough, it worked!

Now why would God do such a thing? Maybe because 1) He cares deeply about my son, and wanted to talk to him at his level; 2) He loves to solve problems and get in the middle of the little details of our lives; and 3) He loves the language of dreams. In another series of dreams, my son Evan, who was irrationally afraid of four things — fire, earthquakes, robbers and tornadoes —  had four short dreams in one night where each of those fearful scenarios happened, yet in each case, he was safe. He awoke the next day delivered of those fears, and never suffered from them again.

A rich diversity of dreams

Dreams have added such richness to my life, immersing me in the knowledge that God is with me, for me, and guiding me. I have dreamed of resigning from jobs I love, only to have the organization unexpectedly shutter operations two months later. Conversely, I have had dreams that opened the door to surprising new opportunities. I have had dreams that warned me of financial storms while also promising that my rescue was assured. Once, I dreamt of what could have been a massively profitable stock investment if only I had followed the dream! I have had dreams that mobilized national prayer. I have had dreams that comforted me with God’s perspective on very painful, personal life circumstances. I have had  dreams two decades old, and not understood at the time, finally came to realization to such a remarkable, specific degree (precisely because I had recorded the details of those dreams), that it would be very difficult to deny that God truly stands outside of time. Even so, He loves to whisper sovereign, foreknown secrets in our ear…through dreams.

Even very recently, in just the last few weeks, I have been surprised as the Holy Spirit has given both my wife and me separate dreams that were so simple and unmysterious, yet profound in their implications. Basically, in both dreams, the Lord simply connected two Bible passages. In one case, the two passages were not explicitly or typically associated, yet the dream revealed a profound connection. In the other, the fundamental connection between two passages was already understood, yet the dream brought insights far beyond my previous level of revelation.

We all know that the Bible makes a strong case for dreams as a valid form of divine correspondence, but we forget how frequently they occur in Scripture. We must go further still. Most of us have no idea how much weight dreams exerted upon the culture-at-large. The Ancient Near East—mind you, the time and civilization in which God first chose to disclose Himself—had a universal appreciation and expectation that gods would talk to humans in dreams. Dreams were considered oracles. In fact, the automatic sobriety with which Bible characters responded to dreams is often missed in our reading of Scripture. Step back a moment and you will realize that dreams are not just plot points in the story. Rather, over and again, dreamers in the Bible responded by taking their dreams, or the dreams of others, quite seriously. They did not do what we modern, enlightened folks tend to do: rationalize and excuse their dreams as either mental or emotional artifacts.

Quite the contrary, by responding to dreams as expected divine augurs to be sussed, weighed and, more often than not, obeyed, we see that the very culture in which God first revealed Himself was built on the presupposition that dreams were messages to be studied and acted upon. Jacob, at Bethel, dreaming of angels ascending and descending, did not awake and blame his indigestion. He awoke with awe, and a proclamation: “This is the gate of heaven! I did not know it, but now I do!”

How did he know? Because a dream told him so. It’s beautiful, really!

Dreams confirm that humanity is designed by God as a portal from one dimension to the next. Dreams represent thin spaces where the spiritual realm creatively and deliberately leaks into our lives through our own thoughts. They come with symbols, warning, direction and invitations. We have no trouble romantically encouraging people to “chase their dreams!” when it comes to imagining a future they desire. But what if wishfulness and daydreams aren’t the end of the story?

Testimonies abound of the dynamic, specific impact which dreams continue to exert upon the earth over the last 100 years, continuing into our present times. Dreams have fueled modern justice movements. Dreams have inspired songs and novels, along with innovation in business, tech, medicine and science. Dreams have led to personal breakthrough. Dreams have warned kings. Dreams are exploding across the Middle East, with Arabs literally being visiting by Jesus in their dreams, and coming to salvation. Why?

In Acts 2, quoting Joel 2, Peter proclaimed that the last days would be marked by an increase in dreams. “In the last days, God says, I will pour out my Spirit on all people. Your sons and daughters will prophesy, your young men will see visions, your old men will dream dreams” (Acts 2:17). In other words, dreams are part of a divine communication strategy that God intends to accelerate at the end of the age. It’s already happening. Even now, He is talking. I’ve experienced it over and over. You can, too.

I want to help you dream!

After nearly fifty years of dreaming, I’m beginning to share my dream experiences more publicly than I have in the past. I’ve launched a free short course (5 sessions) called Dream Drop Zones & Thin Spaces, with more to follow. I appreciate and honor the many who have greatly contributed to this field over the years: Ken Gire, James Ryle, Larry Randolph, Lou Engle, Mike Bickle, Bruce Wilkinson, Mark Rutland, John Paul Jackson, and more.

God is releasing more dreams than ever before. Don’t miss out. Grow your dream life!

Are dreams random biochemical events, or divine messages? Are they to be trusted, or viewed with suspicion? If they are of God, why would He choose to speak in such a bizarre way…and does He still? In Dream Drop Zones & Thin Spaces, I’ll present a number unique insights not commonly taught in other dream seminars. Grounded in Scripture and born out of decades of my own personal experience, I’ll lay a framework for dreams as an expected, even common, part of a Christian’s life, along with scientific insights into how to enhance the practice of dreams.